LGBTQ and More Letters we Need to Learn 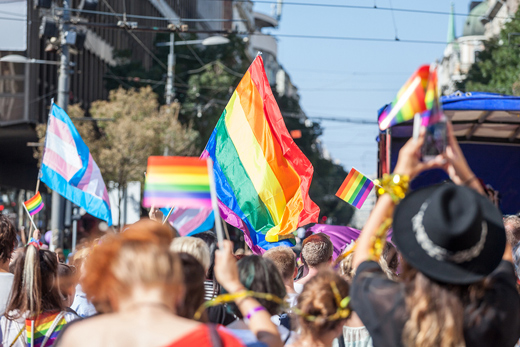 Gone are the days when being gay or “queer” was a curiosity or scandalous… The days when we didn’t know of any people who were “that way” in our own lives.

The estimates are that about 10% of our population is gay. So, if you don’t think you know a gay person, you might be in a climate where they don’t feel comfortable “coming out.” According to the Human Rights campaign 4 out of 10 LGBTQ (lesbian, gay, bi-sexual, trans, questioning or queer) youth say the community which they live in is not accepting of LGBTQ people.

I have a good friend whose 12-year-old revealed that “she” believed that she was “trans.” (I’ll help us out with some definitions in a moment.) Her big-hearted, open-minded father had to digest the information for several days, and one night, before going to sleep, he started crying. Much like for him, it was all his wife had been thinking about lately. She grabbed his hand and asked him why he was crying, and he said, “Because I can’t think of one person in our family, group of friends, or even social circle, who would love our child any less or be anything but supportive of us.” Well, of course she started crying too. And they shared a beautiful love-filled moment.

Their child is comfortable expressing who they are and living in the way they feel right. Not every child has that cocoon. LGBTQ youth are twice as likely to get bullied or assaulted by their peers. LGBTQ youth seriously contemplate suicide at almost three times the rate of heterosexual youth.

I probably just yanked your emotions around a little bit. There IS a vast difference between the reality of a LGBTQ kid who is loved and accepted and the youth who feel that they are outcasts. It is not our place to judge. Only God can do that. But we were put on this earth to love each other, and amazing things can come of that.

What CAN we do? We can start by being in the know and talking to and about LGBTQ in a respectful way. Let’s get all this new terminology in place.

This is also from the Human Rights Campaign which is responsible for things like “National Coming Out Day,” and keeping us updated on all this new vocabulary.

Sexual orientation: An inherent or immutable enduring emotional, romantic or sexual attraction to other people.

LGBTQ: An acronym for “lesbian, gay, bisexual, transgender and queer or questioning.”

Cisgender: A term used to describe a person whose gender identity aligns with those typically associated with the sex assigned to them at birth.

Androgynous: Identifying and/or presenting as neither distinguishably masculine nor feminine. They often prefer to be referred to as “they and them.” Just ask them if that’s the case.

Transgender: An umbrella term for people whose gender identity and/or expression is different from cultural expectations based on the sex they were assigned at birth. Being transgender does not imply any specific sexual orientation. Therefore, transgender people may identify as straight, gay, lesbian, bisexual, etc.

Asexual: The lack of a sexual attraction or desire for other people.

Bisexual: A person emotionally, romantically or sexually attracted to more than one sex, gender or gender identity though not necessarily simultaneously, in the same way or to the same degree.

Gender non-conforming: A broad term referring to people who do not behave in a way that conforms to the traditional expectations of their gender, or whose gender expression does not fit neatly into a category. They also often prefer to be referred to as “they and them.”

Some of that may be news to you. Some of it may resonate with you or someone you know.

Some LGBTQ folks will talk to you about these things, and some are more private. Many people of previous generations still live “in the closet” or in denial within themselves of who they really are. We don’t need to know everything they do in the bedroom, just as we don’t (usually) share what we do in the bedroom, but at least having the right terminology will get us closer to acceptance. The more that we can be open-hearted and accepting of all the people God made, the closer we are to living in a joyful society.

If none of the others do, hopefully this term applies to you:

Ally | A person who is not LGBTQ but shows support for LGBTQ people and promotes equality in a variety of ways.