A Window into Women’s Prison Ministry 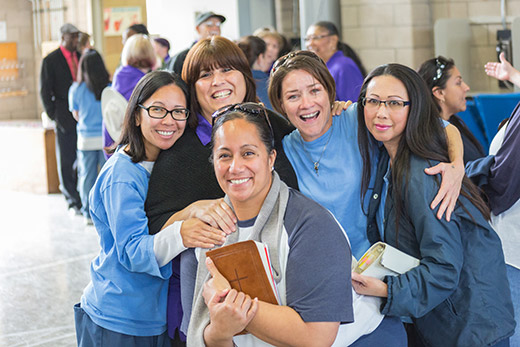 I think one of the hardest parts of deciding that you want to be a good person and make the world a better place is being brave enough and leaning on your faith enough to go to places that make you uncomfortable—even scared. The people who need God’s love are not always the people in our circles. We have to reach out to them and gain a better understanding of where they come from. Part of that process is becoming okay with being vulnerable ourselves.

Women who inspire me tremendously are those who volunteer in women’s prison ministries.

I know of a group of twelve women who drive three hours for a two-day prison ministry retreat a few times a year. They also follow up and visit the inmates once a month. They visit women who have had big problems and hard lives and are now turning to God for strength, forgiveness, and salvation. A big part of the process is forgiving themselves and the patterns and people in their lives that influenced them. What I love about how this comes together is that the women ministers, as well as the inmates, both connect with God’s love in beautiful and meaningful ways. The volunteers get as much out it as the incarcerated women do! The women of the ministry have shared with me some of the responses from the inmates as well as the reflections one of the women ministers.

These are the words of my friend who has done prison ministry for a while now.

Coming fresh off the retreat I can still see the shining, smiling faces of the ladies at the end of the day on Saturday. Throughout the two days that the 12 team members were with them, there had been so many stories shared about the sorrows they have borne in their lives due to poverty, sexual and physical abuse, neglect by their parents and addiction. They were all so grateful for two days off their units and appreciated that we gave them an opportunity for peace and hope.

When we walked in on Friday morning, they may have seen us as privileged “church ladies” but by the end of the day on Saturday, they understood that many of us have also experienced intense sorrows and losses. We all learned from each other the power of God’s love, mercy and forgiveness.

A shy woman who had spoken only briefly during our table discussions, shared on the evaluation sheet that during the Forgiveness Service, she had a profound sense that a burden had been lifted off her shoulders. Whether this was because she was able to forgive herself or those who had harmed her, I do not know, but God knows!

Many ladies shared that their imprisonment had become a gift to them, as they were forced to come to terms with their addictions and turn to faith in Christ instead of a life of crime and hopelessness. Those who were mothers shared how painful it was for them to be away from their children, and how much they looked forward to being reunited with them and, hopefully, to be given a second chance to build a loving home life.

All of us, the team members and the imprisoned ladies, were given a gift during the retreat—the gift of knowing that God our Father loves us with a merciful and unconditional love. We were all able to learn how to persevere in faith and hopefulness by sharing our life journeys with each other.

Here are a few of the comments from the women prisoners about the experience. They reflect the unique interactions they had connecting with the women ministers…

“The journaling and speakers helped a lot, and I enjoyed the meditations and music.”

“The ladies were wonderful and brought the Holy Spirit with them.”

“I liked the scripture being read as I imagine walking and being with Jesus.”

They talked about having opportunity to get in touch with parts of themselves and about being able to “get everything off their chests,” and “finally getting to talk to someone about what bothers us…”

Several spoke of feeling like they had a “weight lifted,” and one woman said, “We were able to let things go that we have been holding on to for a long time…”

“This gave me peace and time to think…The peace that I was able to get to collect my thoughts.”

The Women at the Well don’t march into a prison armed with a stockpile of courage. They go in with open hearts and the willingness to be vulnerable themselves. As author, speaker and researcher Brene Brown says, “Vulnerability sounds like truth and feels like courage. Truth and courage aren’t always comfortable, but they’re never weakness.”

This way they all receive the best gift ever in allowing God’s love to fill them and to feel worthy of that Divine powerful love. We can all tap into that part of ourselves if we just lean on God’s love. From there, we can’t help but exude and share it with others.